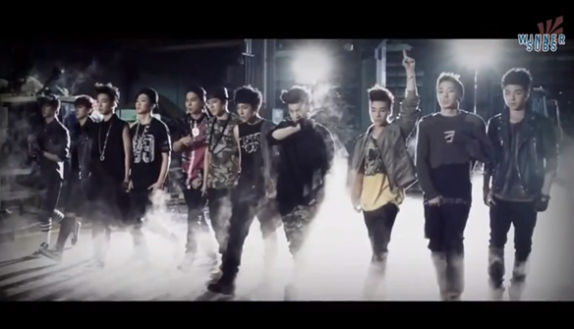 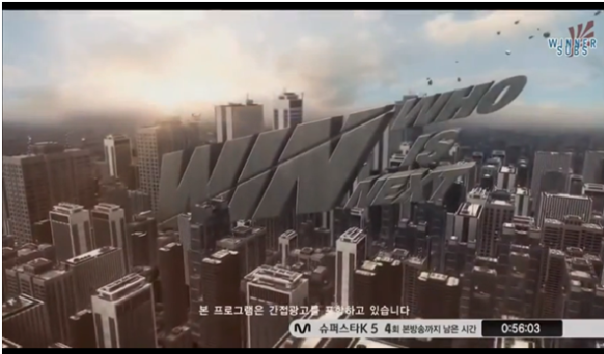 Welcome to another semi recap of YG’s new reality television show!!! This week features their introduction to the world, video evaluations, and team building exercises (I think).  With special appearances from… 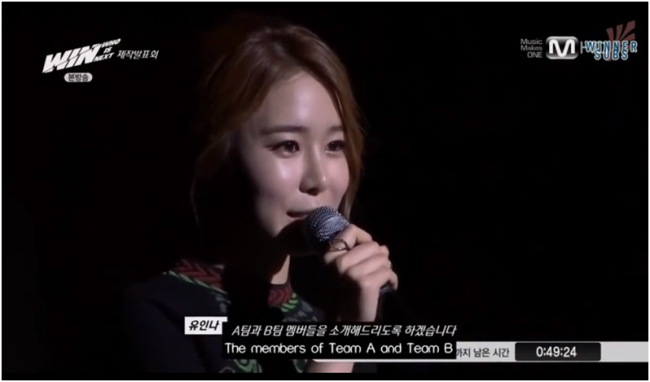 I have pictures of the members this time! Yaaay! Side note: Yoo In-Na is freakin’ gorgeous!!! 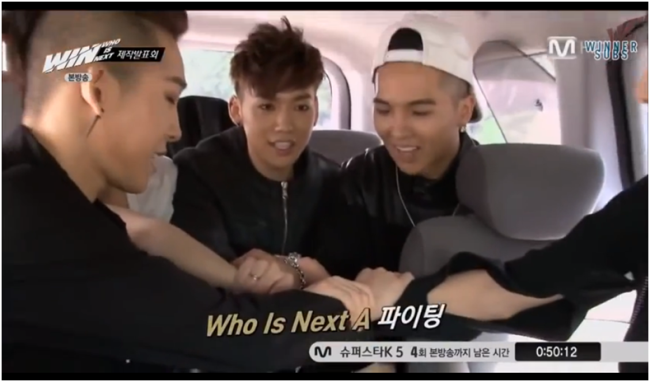 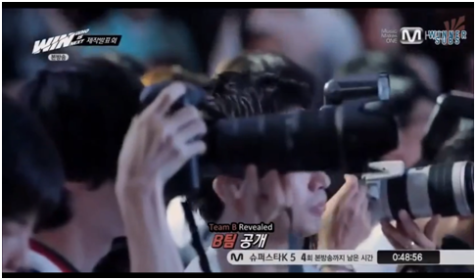 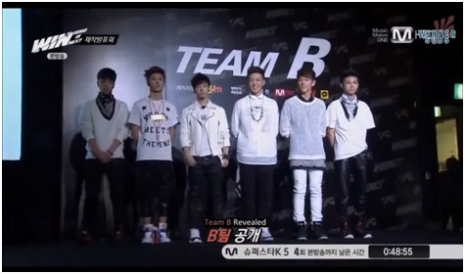 Press conference time.  Look at them looking all fancy and thug like for the camera. 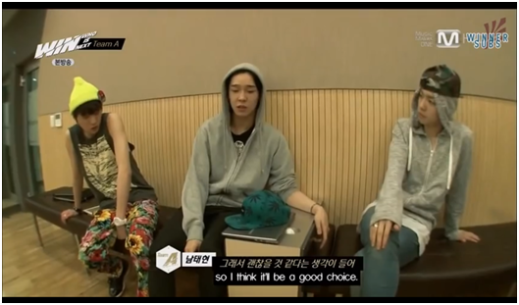 Back to practice.  Team A and Team B choose songs for their monthly evaluation.

Team A decides to go with Alicia Keys’ New Day.  While Team B goes with T-Pain’s Turn the Lights On.

Team A running into problems when their main vocal, Tae-Hyun, doesn’t feel comfortable with the song choice anymore…even though he was the one who chose it.  Sigh, don’t cry, you can do it!! 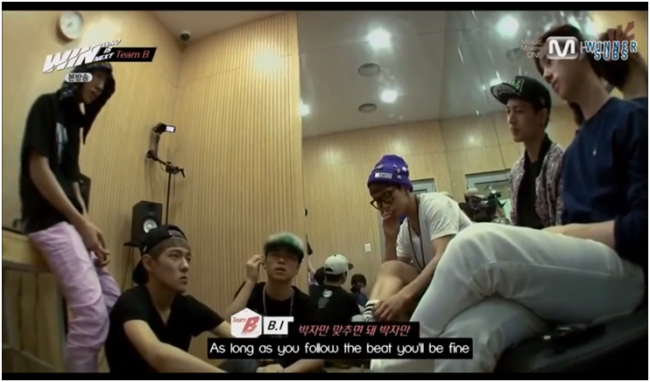 Team B is doing better.  But the one kid, I think it’s Dong-Hyuk is having problems following the rhythm.  But with Bobby’s help everything is fine. Yaay Bobby!!

I want a miniature Jin-Hwan.  He’s too cute~ We can be fans of Jin-Hwan together YG ㅋㅋㅋ

Video evaluations happen before the actual monthly evaluation.  This time Papa YG surprises both teams with a visit and doesn’t have pretty things to say about either group. 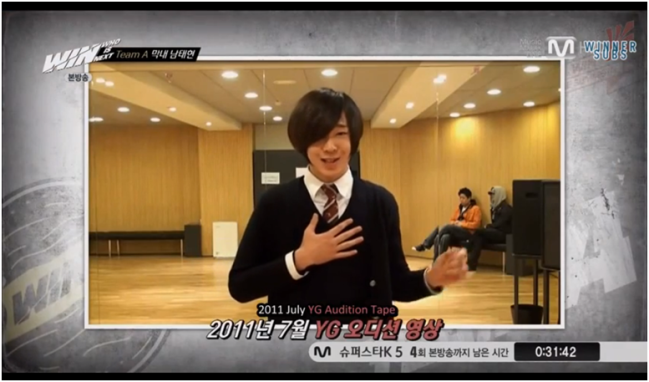 It’s our favorite diva from Team A, Nam Tae-Hyun.  Can you guys hear Almooooost Paradise playing in the background? 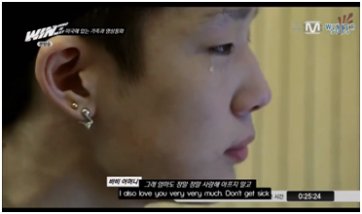 Of course we must have our Bobby appreciation post.  This episode features a little bit about him.  This kid is too adorable.  And look at him crying in the last photo ㅠㅠ(he was skyping with his mom). Things we now know about Bobby: 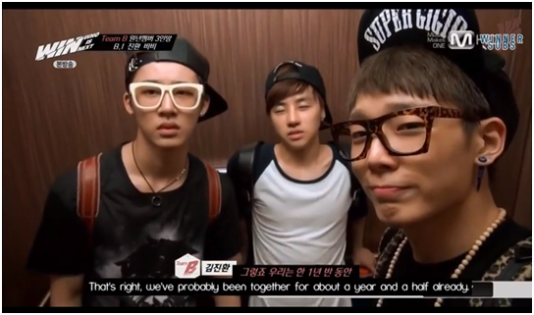 3 musketeers:  B.I., Jin-Hwan, and Bobby.  In the second picture B.I. says because they weren’t really adventurous they didn’t go out much.  In the Korean part though the word 겁들이 appears which kind of means being cowards.  So he’s literally saying that they’re scared of a lot of things that’s why they didn’t go out as much.  What cuties, haha! 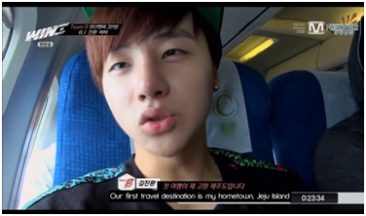 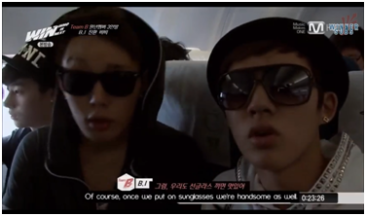 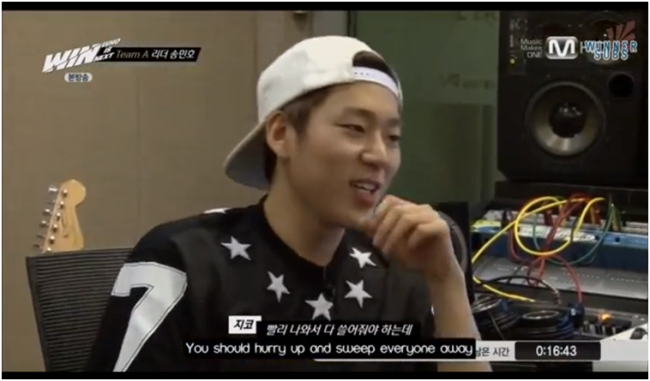 ZICO!! I knew Min-Ho looked familiar.  If you guy didn’t know Min-Ho was in a group called BOM, but they disbanded.  Zico and him have frequent twitter conversations.

YG thinks that Team A needs to work on their communication with Min-Ho becoming their new leader.  So he decides to send them…

…rafting.  Good one YG.  Nothing like good ol’ water to get a team communicating.  By the way, isn’t that a gorgeous picture, haha!

Epik High!!! They come to visit both teams.  After watching both teams practice, Team A seems to be the upcoming victor.  Or are they?

In episode 2 we get to see more of the dynamics within in the teams.  Team A seems to be the newer team, well not the newer team but more like the last minute team.  I don’t think they’ve had enough bonding time like Team B.  With that, Team B having the 3 musketeers is a huge advantage for them because they already have that chemistry.  Half the group already knows each other’s strengths and weaknesses.  Now all Team B has to do is to adapt to the other 3, which I think they’re doing wonderfully.  It seems like the 3 musketeers already have that mind set to take in the new members and help them out at all costs.

On the other hand, I feel like Team A is that group of misfits.  Calling them leftovers is too harsh, but because of their skills and abilities YG thinks that this team will work.  I agree, I just think they need to spend more time together and be more flexible.  Every time I watch them during their free time, time they’re not practicing, it seems very tense.  Unlike Team B where they always seem to be relaxed and goofy (let’s all thank Bobby for that).  I feel like what they need is to be locked in a closet and just talk.  Time in the practice room does not count, and neither does eating time.

Even though I’ve praised Team B, my heart is still for Team A to win.  But that could change.

For those of you guys who have watched the episode, did you guys find the vocal coach to be biased towards Team B?  I mean he sounded so much nicer to Dong-Hyuk when he was off-beat when compared to Tae-Hyun.  The vocal coach was like that too in episode one.  Let me know what you guys think in the comment section.