It was D-Day!! The Epik High Encore Concert was the highlight of the day, heck, the whole purpose of the trip. And we were definitely looking forward to it because “My High is Epik!”

It was a struggle to wake up Saturday morning. Our alarms were set for 8 am but besides T^2, QT were not waking up. We dragged ourselves out of bed to get ready and brought out our “My High is Epik” shirts that we were about to show off to the world.

On this trip we brought along our own food, so whenever we were at our hotel room we were either eating left overs or peanut butter sandwiches with banana, oranges and apples. We were eating them 3 to 4 days straight for breakfast or midnight snacks. Which I would say really helped us on saving money, just a little bit.

We headed out to Princeton Junction around 9:50 am to get to NYC by noonish. Which would give us two hours in Koreatown, to look around and eat before heading out to see Les Miserables at Imperial Theatre. But like I said before, things never really turn out the way we want them to. We couldn’t even leave our hotel floor because the elevators were either packed or slow. So by the time we actually arrived to Princeton Junction our train has already arrived but there was such a crowd and the train was already running late that it left us, making us wait for the next train to arrive around 10:30 am. 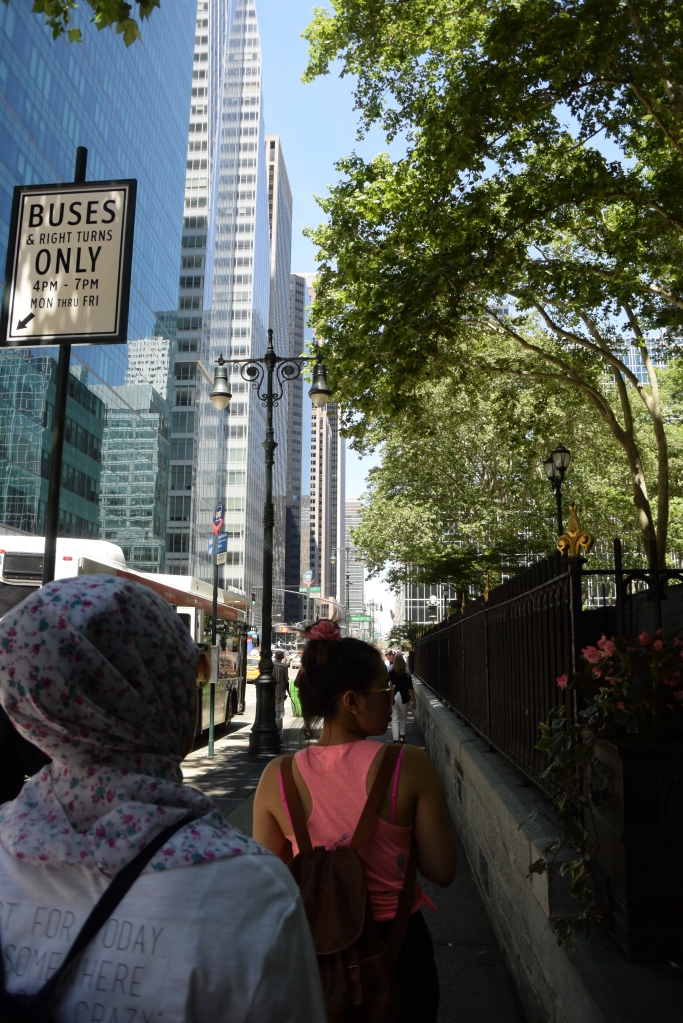 We made it to NYC around the time we originally planned, noon. But as we were walking to Koreatown, we passed Madison Square garden. And as you can see from the picture QT really wanted to stop by and check it out. Too bad we were on a time crunch.

We finally arrived to Koreatown and as we were looking around Q and T^2 saw The Face Shop with the handsome, not really life size poster of Kim Soo Hyun. And we had to go in.

There were so many sales going on but what caught our eyes the most were the face masks. We each grabbed an animal mask; Q a panda, T a tiger and T^2 a fox. The sale for the masks were buy 10 and get 3 free. At first it was supposed to be 10 between the 3 of us and get 3 more. But one way or another both the T’s were each able to grab 10 of their own. While Q only grabbed 3 and was put together with T^2. (T’s stash of face masks, which she already used one.)

After just one stop at The Face Shop for maybe 45 minutes, we realized we had to pick a place to eat, fast.

We chose to eat at Shilla. The restaurant was nice, clean, good vibe, layout and customer service. Oh and their food was good too. What made a really good impression was that most of the male waiters were all good looking and Korean American! Which truthfully was a shock because in Columbus the good looking Korean waiters are all actually Korean with very thick accents.

After quickly eating our food, getting boxes and getting our check we bolted out of there within 30-40 mins. When we normally take our time and sit around for 2 hours at a restaurant. We couldn’t do anything extra that we were looking forward to like karaoke, bubble tea or pat bingsoo. 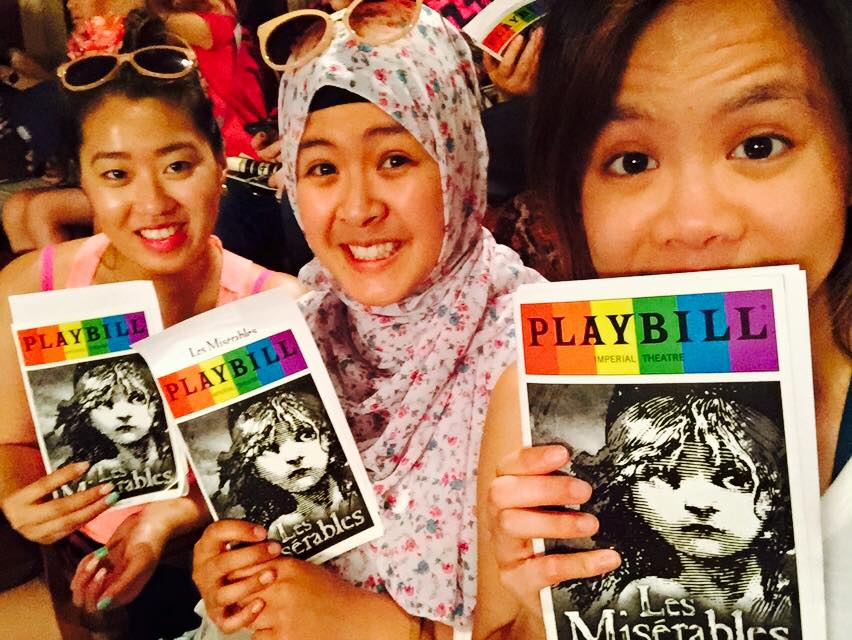 It took us 20-25 minutes to walk from Shilla to The Imperial Theatre, which we actually arrived not knowingly at the back end of the theatre. Another kind stranger told us after looking completely lost and directed us how to get to the front. We made it just in time.

Our seats were pretty high up but the view was not bad at all. During intermission we had to go through the brochure to see the faces of the actors though.

We all cried during the show just all at different times. Q and T^2 have already seen the movie so they understood the whole plot line. While this being T’s first experience with Les Miserables only had an idea of what the plot is. The show was great, emotional, a real tear jerker. Something you really have to see on Broadway to really appreciate it.

As we were leaving we stumble upon another Epik High fan!  She was pulling onto T^2 backpack asking where she got her shirt and she told her, she made it! 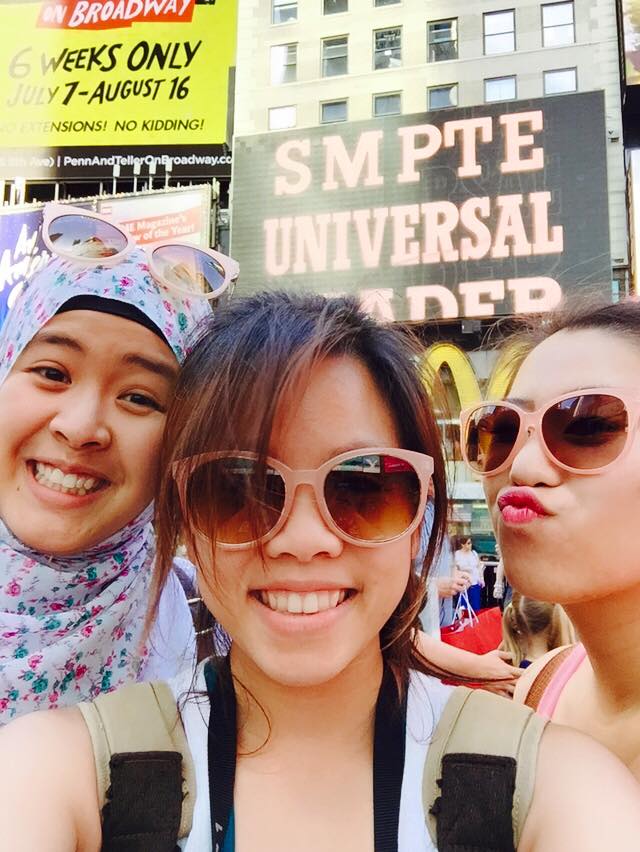 After the show we went to Time Square. Found an emptyish spot and stuck ourselves there to take pictures. We decided to take selfies as we spun around in a circle to get everything in Time Square. 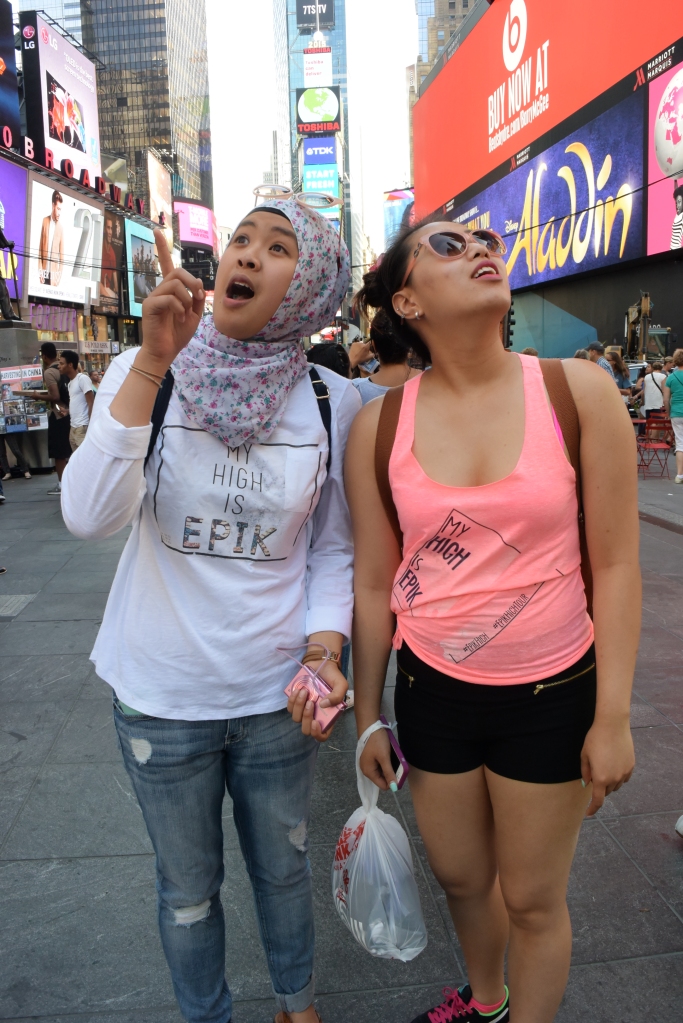 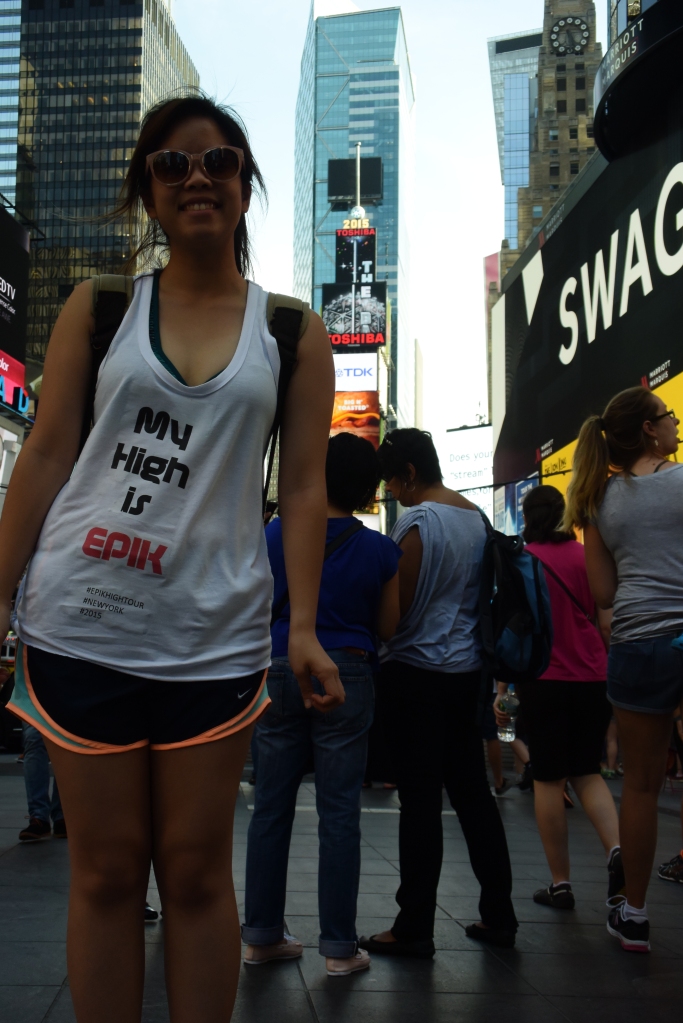 We were totally in tourist mode when we were in Time Square! Taking as many pictures as we could and doing whatever poses we could think of. (Which wasn’t much.) 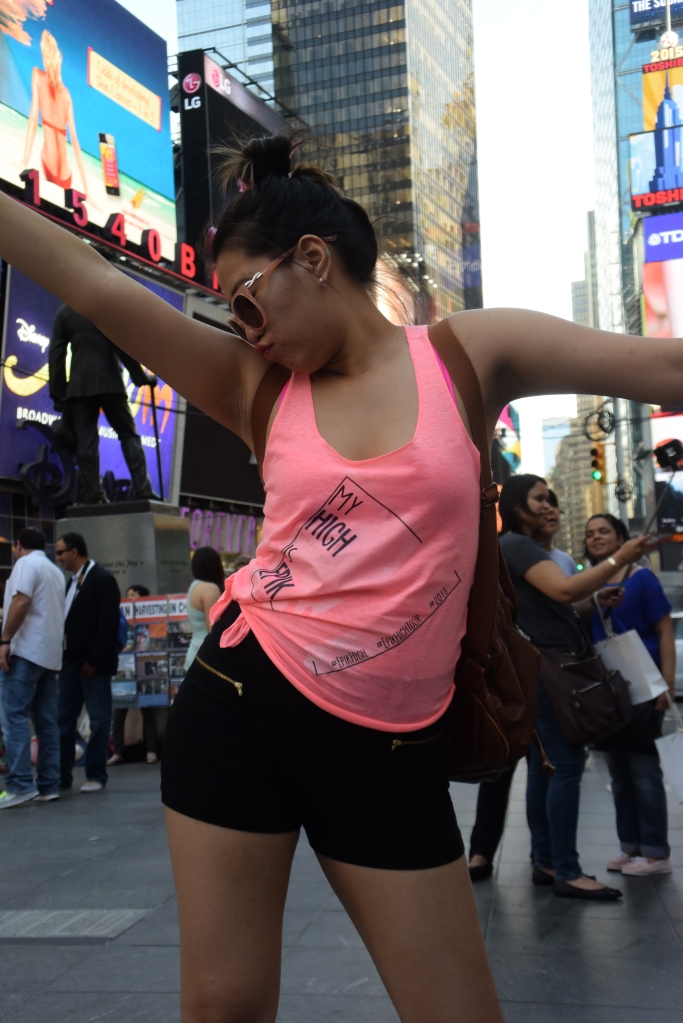 T was trying to block some people from taking our spot or getting in our way. Or she could just have been posing. 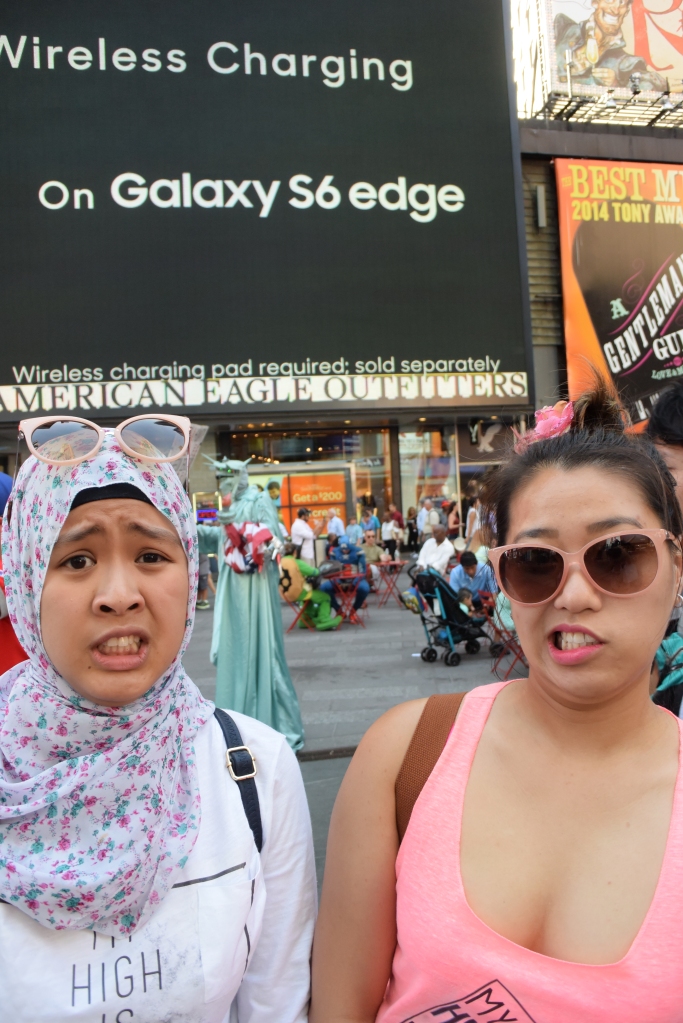 After the Spider Man, Elmo and Mickey Mouse incident the day before, we learned to stay away from the costume people and to take pictures of them from afar. The Statue of Liberty people were scary looking though. They had masks covering parts of their face and it just didn’t look nature; super creepy. Plus they were all men dressed like the Statue of Liberty, they couldn’t get ladies to do it?

We grabbed some ice cream cones from the New York ice cream trucks that we saw everywhere and it was a rip off! We all got vanilla because you can never go wrong with a classic but in actuality you can go wrong. It tasted like whip cream instead of ice cream, a totally disappointment.

Doors didn’t open at 7 pm, they were really running on color people time because it actually opened around 7:15 ish. We got in, got to our seats and the view wasn’t that bad. To tell you the truth, after seeing how they laid everything out we regretted not getting VIP tickets. 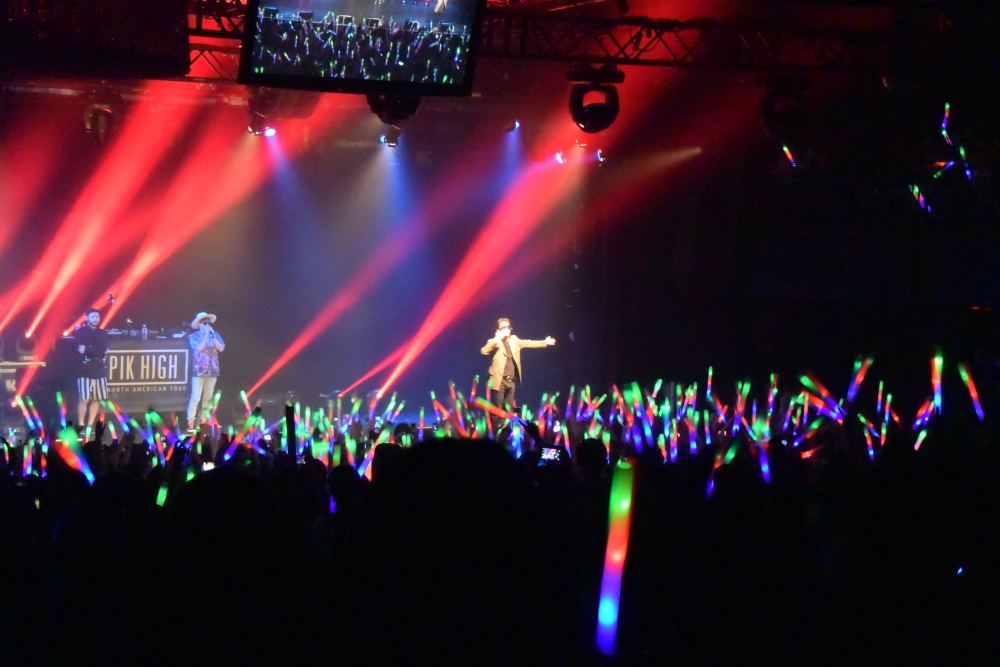 But once the concert started and Epik High finally came out, nothing mattered. There were so much hype and energy it no longer mattered where we were anymore. We had a good view, good atmosphere, great songs and a very memorable show. At the end of the day there was nothing to complain about.

At the end of the night all we wanted was to relive the concert all over again!

Haru appa didn’t really promise but hinted out about another concert tour next year. So look forward to another QT concert vlog in the future.

As we wait for our next concert vlog check out part 1 and 2 of Epik Vlog so High in NYC!