Hey guys, I’m back!  This round of K-Pop Star featured the infamous group rounds which created Season 1’s SuPearls and Season 2’s Raccoon Boys.  Although there weren’t a lot of standouts this year, I found that these groups really pushed individual singers into the spotlight.

Group rounds started in episode 6 and started with a group showcase.  After the group showcase the real competition started and judges began to eliminate contestants.  The show pinned two groups against each other and at least one person in the losing group was to be eliminated.  Which by the way is the  stupidest rule in world!

Here are my top performances in no particular order.  Enjoy! 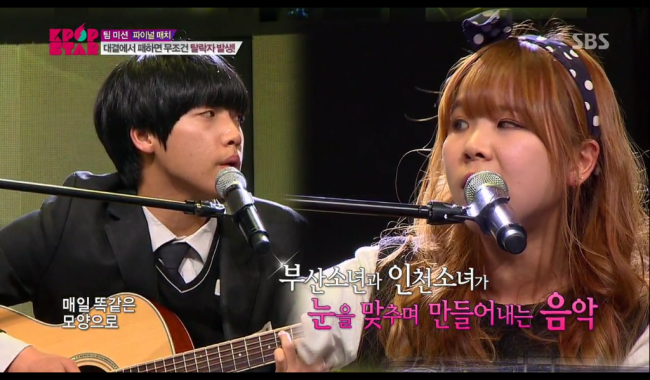 Singer-songwriter duo, Something, comprised with Jung Se Oon and Kim Ah Hyun was the best surprise in these episodes.  With a noona-dongsaeng (older sister-younger brother) relationship, you would think that things would be awkward between them, but it was the complete opposite.  Connecting through social media since Ah Hyun worked in a bakery shop and Se Oon lives in Busan, the two shared ideas to create an original piece “1020”.  “1020” tells the story of a person in their teens and girl in her twenties and what they want or what the wished they could do.  I have to say this concept is genius!  And they sounded so good together, a lot better than they did in group showcase.  They are too cute together too.  They have matching headbands, only he’s wearing it on his wrist.

Unfortunately they went against HapChae (the three young girls) and they lost.  Jung Se Oon was eliminated and everyone was sad.  Especially Ah Hyun, you could tell she was having a really hard time throughout the other performances.

We have our divas of the show!  They were put together after the first group showcase.  These girls performed Amy Winehouse’s “Rehab” with so much sass that Viner Allicat would be extremely proud of them.  Especially Jo Yoon Kyung, she has so much charisma it made the performance that much better.  Kim Soo Hyun looked adorable in the beginning, trying to be a rebel with all the sass she has.  Jang Ha Na, she’s gorgeous and sings very well.  The judges have commented on how she shows a different side of her every time and it’s refreshing; it’s not awkward at all.  YG commented that they were better than SuPearls.  That’s a big compliment.

They made it to the next round! Sass!

I forgot about her, Hong Jung Hui, but after this performance she won’t be off my radar at all.  This duo performed Mariah Carey and Luther van Dross’s “Endless Love”.  This song requires a lot of chemistry and the judges questioned them.  They proved them wrong by being able to prove that their relationship is great by the fact that they can hold hands for a few seconds.  As corny as that sounds, they really did prove that they had great chemistry with each other.

Did anybody else find Yao Wei Tao’s Korean super adorable?  Lol, anyways they won and make it to the next round.

2분의1 (Translated, I think it’s something like 2 people in 1)- Peter Han and Jjari Mong Ddang.

They were good.  So good. Great.  JYP said that their performance was the best they’ve seen in all of K-Pop Star.  The group performed JYP’s “Don’t Leave Me”.  They rearranged it so that it would fit their style.  Of course the girls of Jjari Mong Ddang were great, but Peter Han really developed as a singer as well.  The girls really  helped him to really increase his vocal abilities.  Plus, they’re really cute together.

They were up against EQ…

As you know, EQ were paired against 2 분의1 and boy did the judges have a mental breakdown trying to decide who won in this match up.  EQ, with the likes of Bernard Park, Kim Ki Rin and Sam Kim, sang Brown Eyed Soul’s “My Everything”.  The judges said that they were pretty much a perfect team except for one thing: the language.  With Sam Kim and Bernard Park from the States, they needed to prove that they could sing in Korean with feeling.  Watch the performance, I think they did just fine.  Especially Sam Kim, JYP noted his groove which you can’t learn and just have it within you.

Their match was the big match of the episode.  EQ vs. 2분의1.  Winning by just a super small margin…2분의1.  Unfortunately the judges had to let go of Kim Ki Rin, because of that STUPID RULE!

At the end of the group round, the judges gathered together and decided to use two wild cards and brought back Jung Se  Oon to be a group with Ah Hyun and Brody (eliminated against Ya Hong).

Next round is the one I look forward too, Casting Rounds.