Welcome back!  Or if it’s your first time here, then welcome!  I’m sure by this time you all know that this week’s episode features the G-Dragon vs. Taeyang showdown.

After their second monthly evaluations, Team B is declared the winner and goes on a vacation.  Before they leave, they are told that their next evaluation will be guided by G-Dragon and Taeyang of Big Bang.  Taeyang will be mentoring Team A while Team B will receive advice from G-Dragon.

Team A, after hearing that they will be getting help from Taeyang, gather together to figure out what Taeyang song to sing.  They narrow it down to two choices: “Only Look at me” and “I Need a Girl”.  They all feel good about both songs, but they need to choose the best one.  They take a vote and choose “Only Look at me” based on the feel of the song. 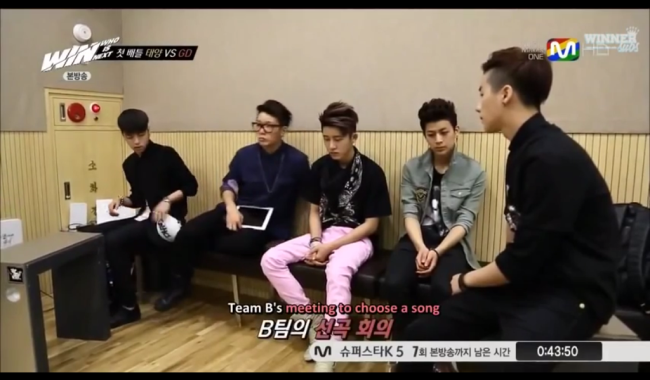 Team B tries to pick a G-Dragon song.  They are stuck between “Crayon” and “One of a Kind”.  Yoon-Hyung and Joon-Hwe want to try “Crayon”.  While Bobby and B.I., argue that it’ll be hard to rearrange it to their style.

Team B in the end chooses “One of a Kind”.

In this episode, we also get a little back story on Joon-Hwe, Dong-Hyuk, and Yoon-Hyung.  And I learn that they’re all younger than me (well, I already knew that, but I didn’t want to face it)  and my heart breaks ㅠㅠ.  Actually, all their audition tapes were impressive, especially Joon-Hwe’s.  For those of you guys didn’t know, Joon-Hwe was on “K-Pop Star”.

He’s the one in the white shirt.

YG pointed out that these boys didn’t exactly have the “hip-hop” style, but he wanted to see how they could grow over a year of training.  They all had the potential to be adapt and be great, that’s why YG put them in the group with our 3 musketeers (B.I., Bobby and Jin-Hwan). 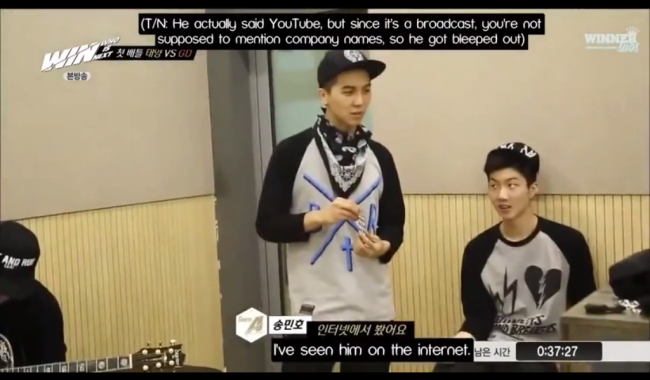 Team B talks about if they have ever met Taeyang.  Tae-Hyun has seen them in the infamous YG cafeteria and greeted him. He looked so shy and happy when he told the story.  Min-Ho says he’s seen him before. On the internet. If that’s the case, then I’ve met Taeyang too, plenty of time, Lol, that got everyone laughing. 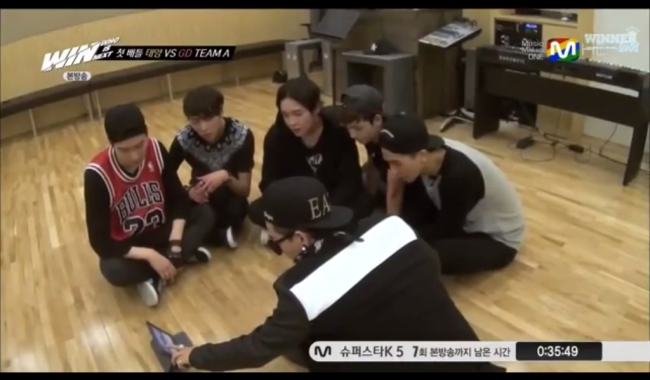 Taeyang comes and visits them.  He looks at what they’ve worked on and points out what they need to work on.  Not going to lie, the whole time I kept on thinking, “Taeyang, you’re good looking and all, but you need to shave. Now.”

Taeyang’s visits are helpful as he tells him how to improve their overall feel of their performances.  He also gives them specific pointers on how to improve their choreography.  I have to say, when Taeyang told Seung-Yoon to bring out his guitar, I was like, “YES!”.  I’m all for harmony and skilled vocals. 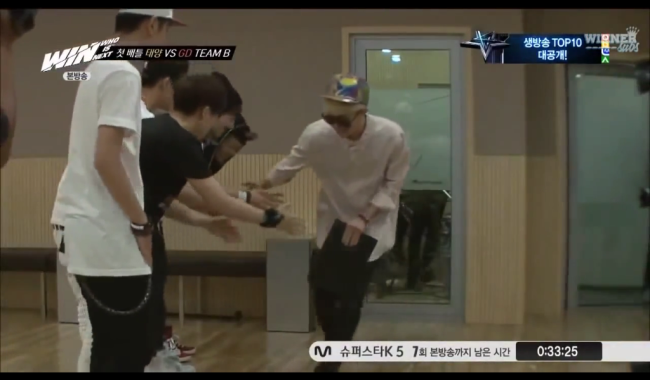 G-Dragon enters Team B’s practice room enthusiastically.  His visits are similar to Taeyang’s but he focuses more on their performances.  He tells helps the rapper line with their raps and gives them more pointers on swag.  That sounds a little funny, huh?

Team A and B take a break from practicing and go to G-Dragon’s concert.  Both teams are surprised how much they are recognized.  Look at Bobby, he is too adorable. 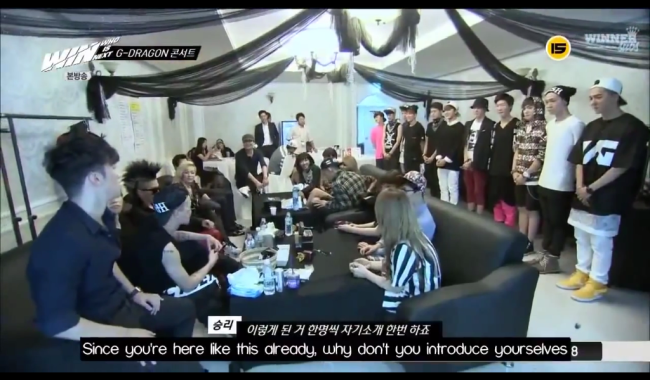 They go to G-Dragon’s waiting room, where everyone is at.  I mean everyone.  Seung-Ri being the variety expert that he is has them introduce themselves.  Notable introductions:

Seung-Ri takes a liking to him and Jin-Woo, it looks like. Haha.

YG asks who they like better between Team A and B.  Most of them choose Team A. 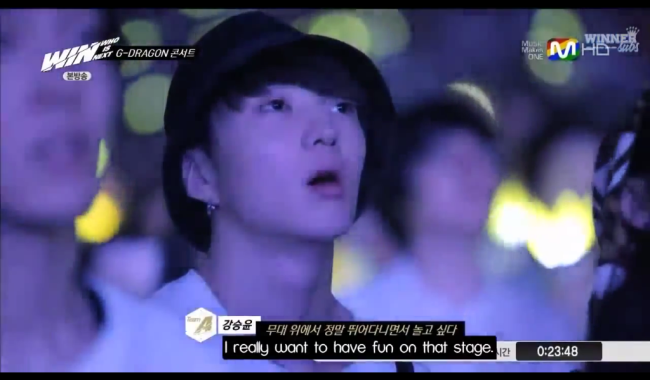 Seung-Yoon’s face pretty much sums up everyone’s feelings on the concert. 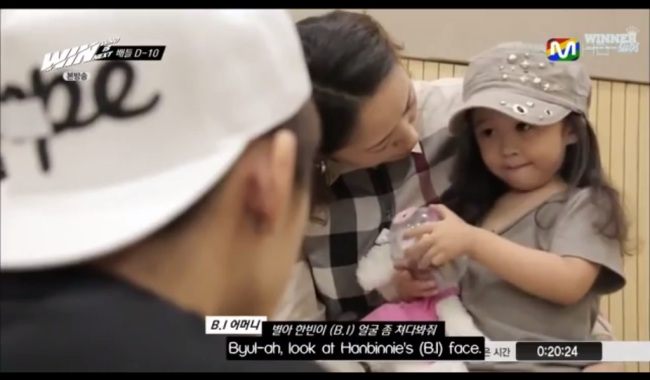 B.I.’s sister and mom comes to visit him.  Dude, his mom looks super young! And his little sister is so cute.  Isn’t this like cheating put this on the show? A foul? Lol.   Anyways, B.I. and his sister are so cute together.

You’ll have to catch the next post to find out who wins.

I don’t have much to say about this episode.  I know I talk a lot about biases in the show, but I didn’t really see anything that stood out.  When we talk about how G-Dragon and Taeyang were chosen to mentor what group, at first I thought it was unfair, but when I really think about it, it’s the perfect fit.

Team A and Taeyang mesh well together because of the fact that they are a vocal group.  I know that both groups have a larger amount of vocals, but Team A has better vocal skills.  Taeyang’s not the best vocalist in Big Bang, but when he’s solo he really does connect to people with his voice.  I think that’s what Team A is missing.  The natural feeling.  Right now when they sing they give off this feel that they have to prove something as Taeyang mentioned, and I agree.

Team B and G-Dragon are great together because they both have that excitement factor.  They just excite people when they perform and who better to mentor them than the king of performances.  The problem with Team B is that it’s hard to pinpoint their faults.  I feel like when a new group debuts they shouldn’t be too perfect because then they have no room to grow.  Sure, G-Dragon helped them with a few things, but it didn’t seem like it was much.

I can’t really judge if their G-Dragon’s and Taeyang’s tips helped them.  We’ll just have to wait until next episode.

If you were YG, would you keep G-Dragon mentoring Team B and Taeyang with Team A?  Or would you switch?