This week’s episode starts our journey to the top 8 of K-Pop Star season 5. Before we get into the competition, the contestants get a little makeover and do a photo shoot to prepare themselves for their future as superstars.

If you guys aren’t familiar with the show, in this round the contestants randomly choose whether they’ll be placed in the A group or B group. Out of the people in each group, three people/teams will make it through to the top 8 automatically, while the other two are up for eliminations. After both groups have gone, the 100 people audience will vote for one of the four people up for eliminations. The two people with the least amount of votes are eliminated. 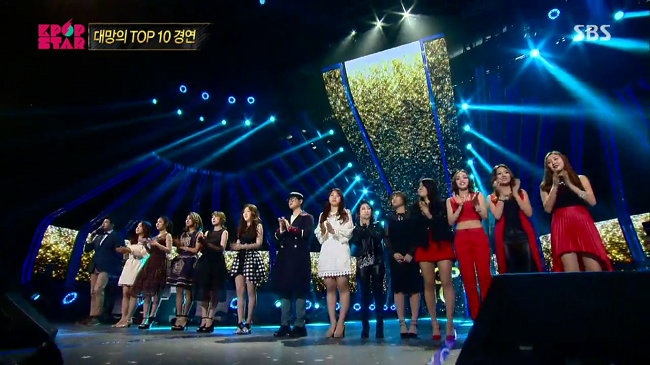 Before we start, can we just give props to the stage director. The stage was so on point tonight!

Lee Si Eun, beautifully, starts the show off with her rendition of of Lee Juck’s “Laundry”. It was beautiful and a great way to start the episode. I thought she definitely had more emotion in this performance than all of her past performances combined. JYP said that there was something missing. I think he said something along the lines of do what you want to do because it feels like something is holding you back. I can kind of see and relate to it, which makes me like and understand her even more. There’s gotta be a song out there that will let her explain why she’s feeling the way she’s feeling, the suffocation and the frustration and everything in between.

I thought that it was great. Joo Mi Yeon’s performance at least. It seems like all the criticisms are more technical singing stuff that I don’t understand. I enjoyed her voice and I had to remind myself to close my mouth from time to time. I do agree though that she needs to pick a song that will make her a star. I’ve enjoyed her performances so far but I’m still waiting on the one that will wow me like no other.

This girl doe. An Ye Eun. She is exceeding all my expectations. From her look to the concept of the song to the song itself, it rocked. I’m so into her concept and her vibe. She has this dark vibe to her but, like, it’s fun. It’s not depressing and sad but fun. And she freakin’ rocked it with the band. The best thing about it was that it seemed like everyone enjoyed it which the judges were so worried about in previous rounds.

Mazinger S brought it. When I saw that they were going to perform “Her” by Block B, I was like how are they going to do that. But they had so much energy, it was great. Liu Yu Yu’s rap doe, like what! Where did that come from? I have to agree with what JYP said about having similar performances. I love the sass and attitude, but maybe not so much in your face, let’s start a fight kind of sass. Maybe something more along the lines of the vibe and free-ness of 2ne1’s “I don’t care” mixed with the confidence of “I am the best”. Lol, does that even make any sense?

Park Min Ji sang Baek Ye Rin’s “Across the Universe”. I love this song and I think that she did it justice. She changed it a bit, at first it was a little weird but then I got it. You know? I got it. And it looked like she had so much with it, it was great to see her enjoying the stage.

An Ye Eun gets first place, followed by Park Min Ji and Mazinger S, which leaves Joo Mi Yeon and Lee Si Eun up for elimination. Next week the A group performs and it’s bound to be epic with Jung Jin Woo, Lee Soo Jung, and Yoo Jay. I can’t wait!

But I guess while I wait, I’ll shamelessly watch a few of my videos. You should too (not shamelessly, but proudly)!

See you next week. Thanks, Q.