Hi all! I’m back with King of Masked Singer recaps and, boy, does it feel good to be back watching and recapping this show. Yes, I’m sooo upset that I missed the EXO Chen episodes but ngl if I did recap that it would have been a lot of fangirling (and yes, I probably would have known it was Chen. SUPER FAN!).

Anyways, it’s great to be back and this episode was really entertaining and not only because of the singing. 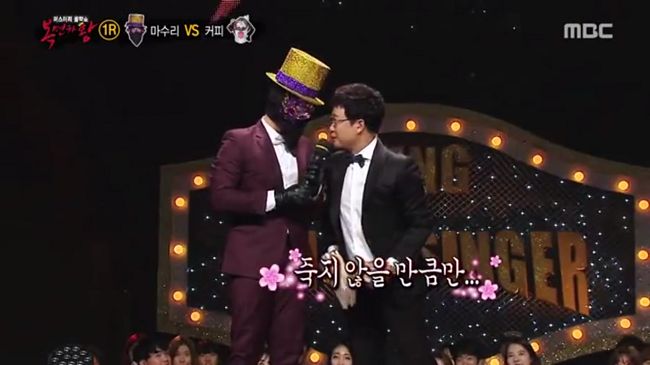 Shall we get started?

The girl’s voice I’ve definitely heard before, but I can’t really pinpoint where. I like how they were practically in the same pose throughout the performance, although Really Tall Clown did try to look at her but she totally ignored him. But she definitely should have, you’ll find out why. I kept on thinking that the dude was Seulong because of his height, but I knew Seulong’s voice didn’t sound like that unless he was faking. 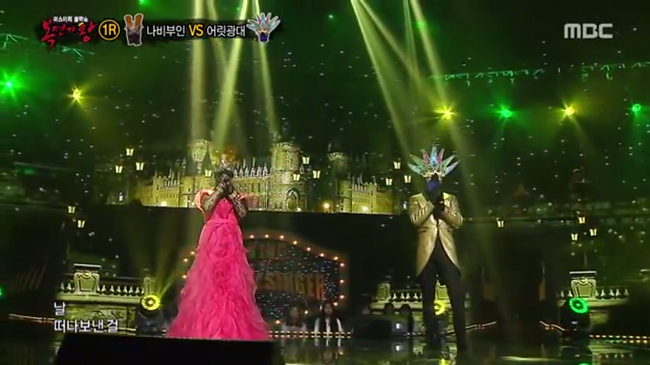 I personally would have voted for Really Tall Clown, but he lost by 3 votes and Butterfly Wife made it through to the next round. Really Tall Clown is none other than actor Kim Dong Wook. His solo song was really good and one of the panelists noted that his voice brought nostalgic feelings or more like his voice reminded him of the past. Oh, did I mention that Kim Dong Wook can dance? What a hottie!

I loved how they sang an old OST song. They both have really unique voices but the Ew! Math dude I knew instantly was comedian Kim Young Chul. The other person nobody really knows who or what gender they are. At the beginning of the song they sounded like a man, but closer to the end they sounded like a woman. What if we have another Baek Chung Kang?

Well, since everyone practically knew who the Math dude was he was eliminated. I guess it seems kind of unfair, but I would have voted for the other person. I love how the MC pointed out that Secret’s Hyosung voted for him. Like, why? Kim Young Chul had us laughing during his performance, interview, and post revelation. What a true entertainer.

Round 3: Our Voice vs. Pencil

This was a hard round to pick someone to vote for, but I would have voted for the girl because she had a really unique voice. But then again she could have faked it, lol. I love how the panel mentioned that she must be a little older because of the way she dances.

Our Voice was eliminated, but you’ll never guess who it is. He’s not a singer by profession or an actor or a musical actor. He freakin’ fights, he’s MMA fighter Seo Doo Won. What?!?! Yeah, my exact reaction. He’s a really good singer and his father just recently passed away, so he performed the song for him.

Round 4: Suri Suri Masuri vs. Coffee

*not the official version, but you guys deserve the full version*

Uggghhh, omg! Their duet is definitely one of my favorite duets ever on this show. Their voices blended so well together and they were so in sync. I had goosebumps everywhere! You know what? I just had this thought, what if the girl is one of the girls from CSJH the Grace? I also want to throw out Red Velvet’s Wendy or Seulgi. It could also be Davichi’s Kang Min Kyung, but her voice sounds a little different compared to this lady. But I wouldn’t doubt her vocal skills to be able to change her voice. 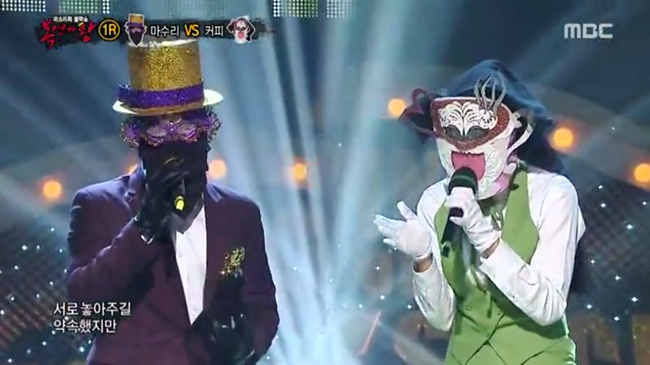 The votes were close with just 1 vote difference between them. Unfortunately, Magic dude lost and was revealed to be Postmen’s Sung Tae. He’s been in the industry for a while, but was one of those singers without a face. He said it felt good that he was able to sing on broadcast which he barely does. He should, though, because he’s sooo good!

Who do you think will go against Hawaii and maybe take the crown away? Let me know in the comments below, I will definitely reply!

Or if you don’t feel like commenting watch this video of us being stupid or the video below where we wished we could sing as well as those people on King of Masked Singer: