It was finally Friday and we had most of the day planned out already. We headed out to NYC around 10 am, got there around 11:30, headed to Chinatown, then Little Italy and finally our Harbor Light Cruise with Circle Line Cruise at 7 pm. Then whatever happens in between was up to us and whatever we felt like doing. It is just our luck that our plans sometimes follow through but not in the way we thought it would.

We had 2 queen beds in our hotel room, it was decided that T^2 would have a bed all to her self the first night so QT had to share a bed. It was to T’s wide awakening that Q snores when she’s extremely exhausted. (Oh BTW Q is a heavy sleeper while T is a light sleeper. So can you already imagine what that night was like?)

Q was the first to wake up around 8 am because she had to go pee but after she did her business she went straight to her laptop to finish up our first vlog. It was actually T^2 that woke up, washed up and got ready first. We all knew T has a hard time getting out of bed in the morning but she was really reluctant to leave the sheets.

We finally got ready and looked up the times of when the train will arrive to Princeton Junction and started to head out.

Us waiting at Princeton Junction. As you can see in the picture it was 11:20, and earlier I said we wanted to head out at 10. The train was supposed to arrive around 10:15 but by the time we got there the train was already there and was leaving as we went to buy our tickets. We waited inside for a while but that wasn’t really a good idea because it was so hot, humid and muggy. This was already known to all but T displayed that she really hates the heat.

We’re finally on the train heading to NYC! We were really grateful that it had A/C. By just saying “let’s hope we get there in one piece,” we started to talk about which body part we wouldn’t mind losing to keep ourselves entertained. (Yes, we really did have that kind of conversation.)

We finally arrived to NYC! The train was packed and it seemed like everyone was going to NYC with us.

This was the two T’s first time at NYC and we found out quick that there was no such thing as traffic laws and how crowded it was even on a weekday around noon.

As we were looking for our subway station, we passed the Best Buy Theatre!! (It was around 1 and people was already waiting in line for Epik High!) We passed it three times because we didn’t know/noticed that we passed the street we were supposed to turn on. 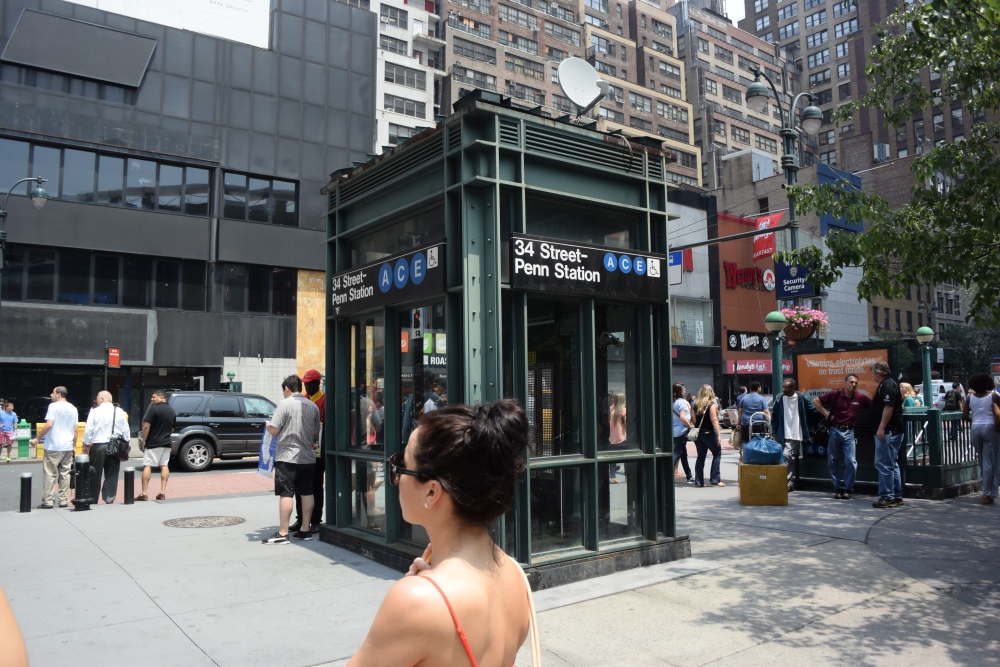 Thirty-fourth Street and Penn State was our subway towards our first destination, Chinatown. 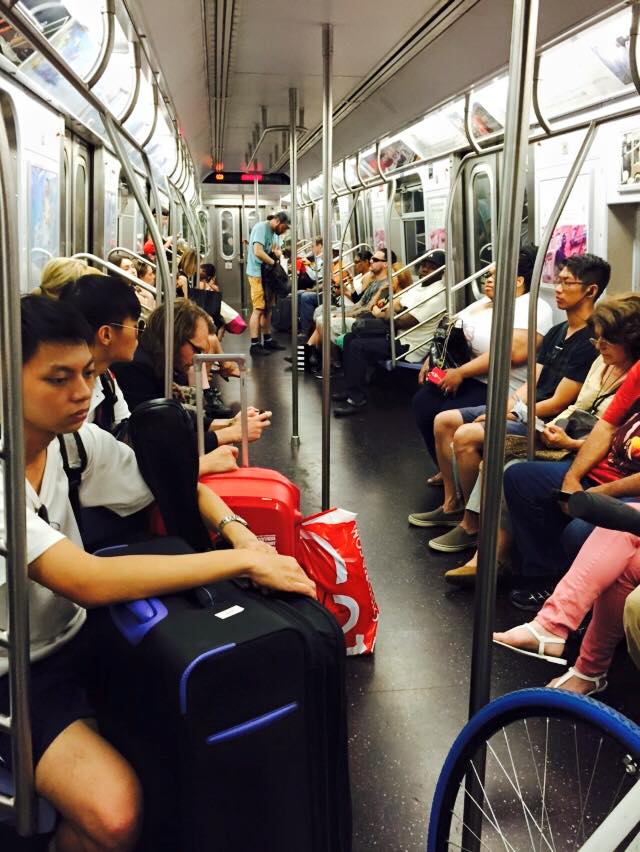 We arrived to Chinatown! Now it was time to look for bubble tea, yummy food, exotic fruits and decent priced asian things that we can’t find in Columbus. 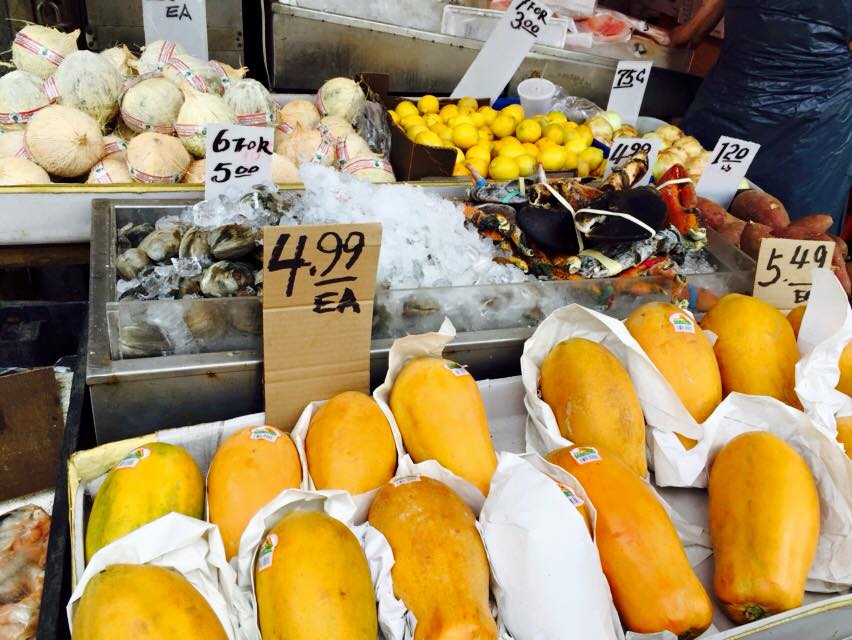 T really wanted to buy some exotic fruits such as rambutan, lychee and papaya but they were overly priced and we didn’t want to carry them around all day. 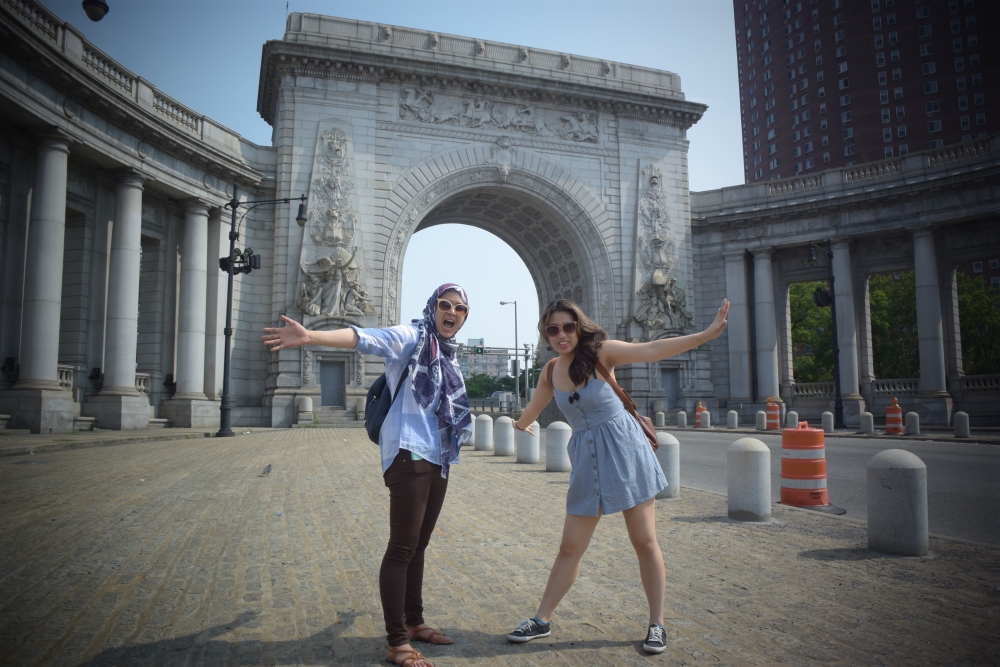 After we shopped at only one place for around an hour, walked around and in the belly of Chinatown, we stopped by another place thinking there would be stationary (and to sit in the A/C for a while) but not really but found they sold Gonggi! After we left, we got lost, just our luck. But we found this beautiful arch that was closed off but we went to take pictures anyways while other took picture from the other side of the street. (We are total HAMS.) 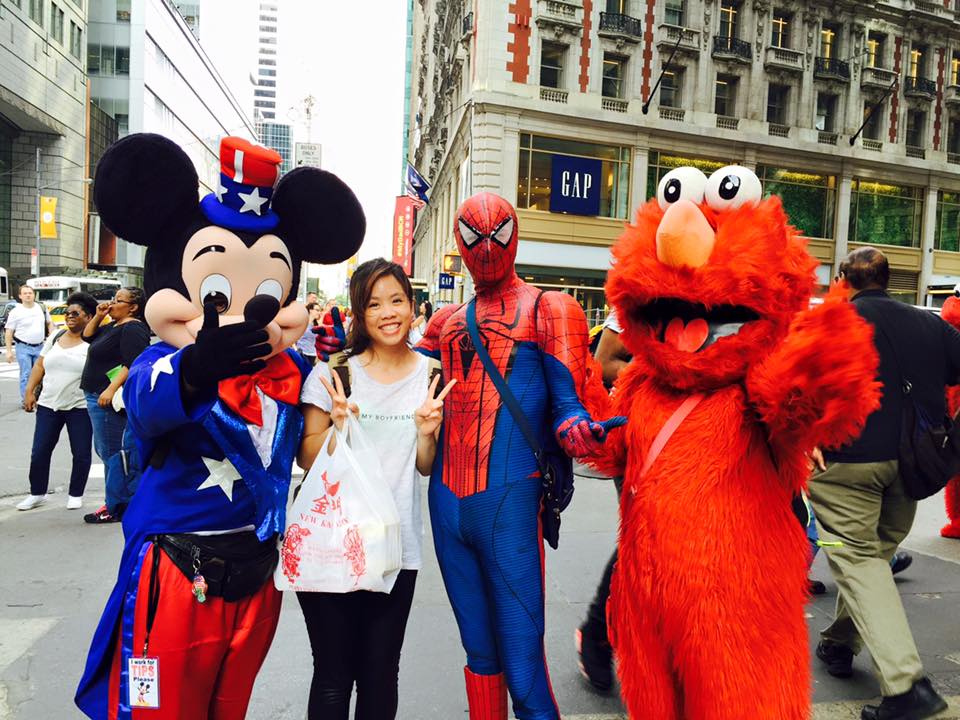 We finally made our way back to our train station thanks to a wonderful and kind stranger that helped us TWICE, we finally made it back to Midtown Manhattan. While walking towards the pier, T^2 got snatched up by Spider Man who asked us if we wanted pictures. The pictures turned out great but then afterwards they demanded tip. (Um, excuse me?) Spider Man was telling us they’ll split the money and that $20 was good, we just looked at each other. He then went down to $10 and we continue to look at each other. T and T^2 hesitantly pulled out $10 and before we could think twice Elmo snatched T’s $10, Spider Man snatched T^2 $10. Mickey Mouse looked at Q and said “No tip for Mickey?” And she pulled out the only cash she had left a $5. So in the end we got hustled for three pictures for $25. (We still don’t think it was worth it.) 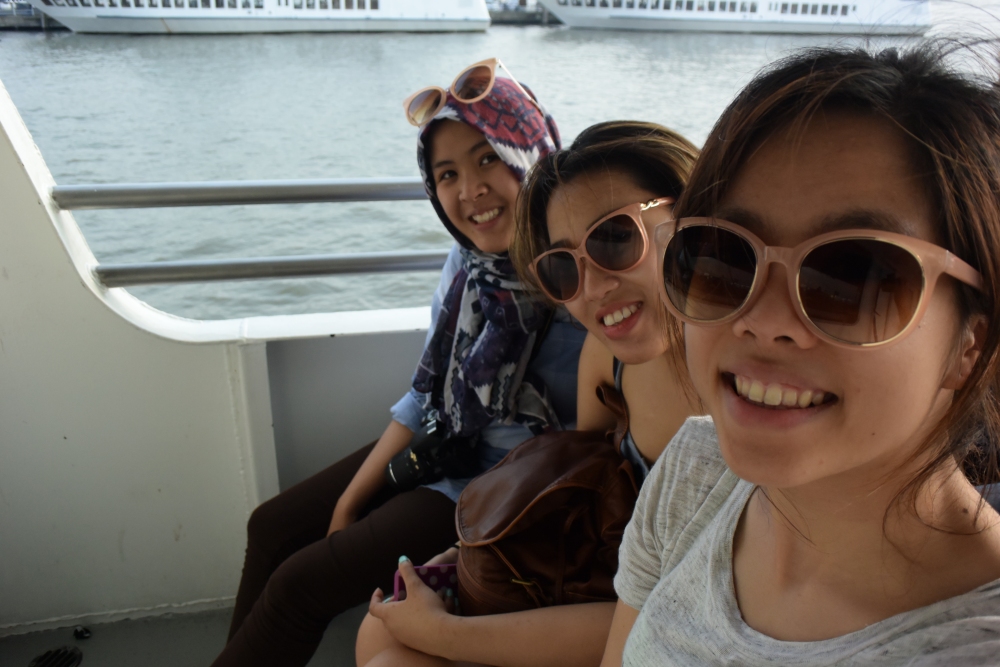 We made it on the Circle-Line Cruise for the Harbor Light Cruise on the Hudson River!! It’s was an hour and a half trip and it was great! Too bad sunset isn’t till 9 pm so there wasn’t much lights but we still had a beautiful sunset. Our tour guide was great though too bad we couldn’t hear him for most of the ride. 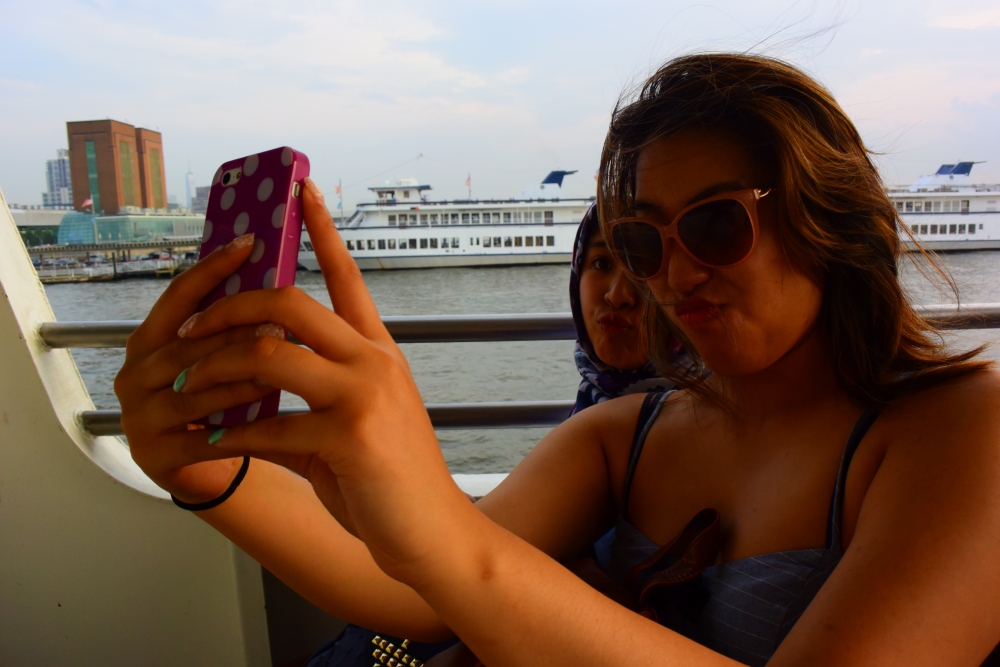 Always have to take selfies and snapchats.

We had the New Jersey view the first half of the ride, which isn’t too bad but our tour guide was talking about New York at the time and we couldn’t see much.

Statue of Liberty! Look at the view, sunset and silhouette. 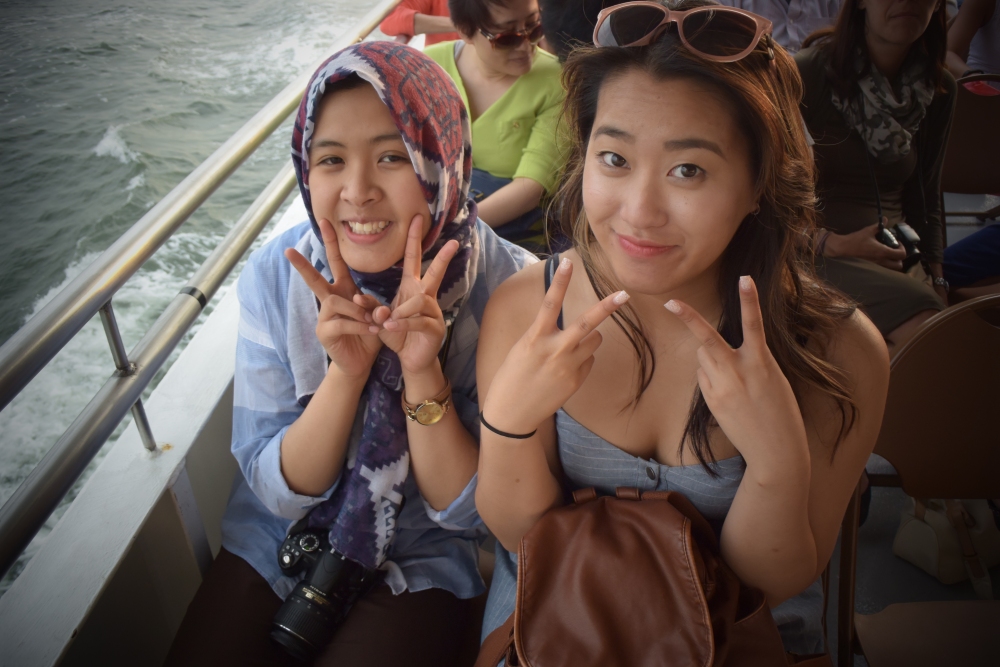 We’re super “Asian” we love to pose and throw up peace signs every time we take pictures. 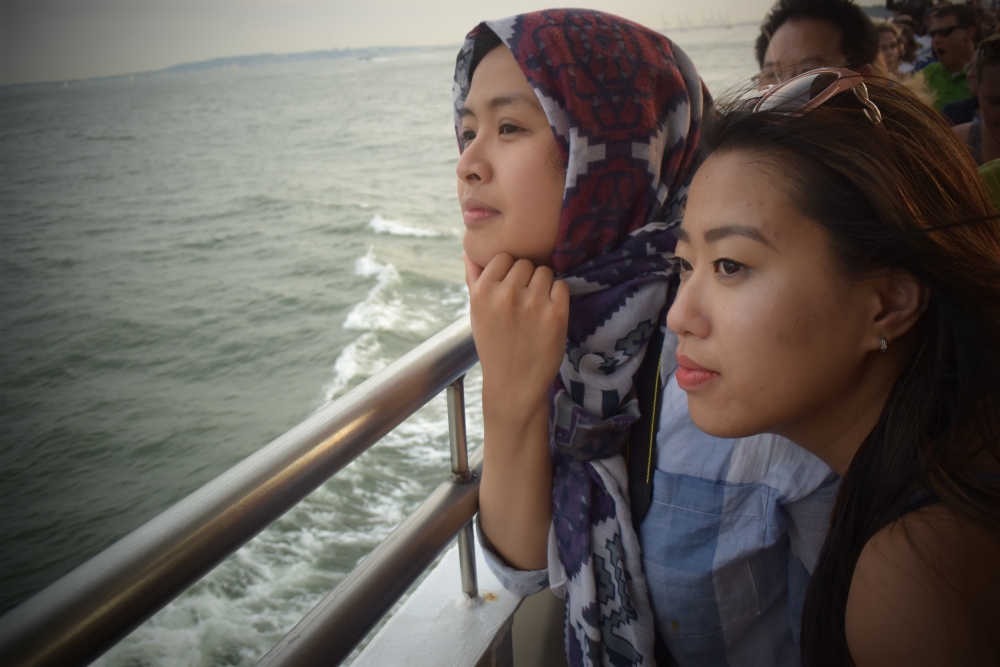 But T^2 wanted to take natural pictures. T was fine with it but Q couldn’t keep a straight face or act “naturally”. I would say normally but us goofy, silly and HAMS are us normally.

T^2 took great pictures of us through the whole trip!

We enjoyed our experience and great view.

T^2 finally was able to take a break and we took her picture being “natural and normal”.

We truly didn’t know which bridge was which. (Still don’t.) 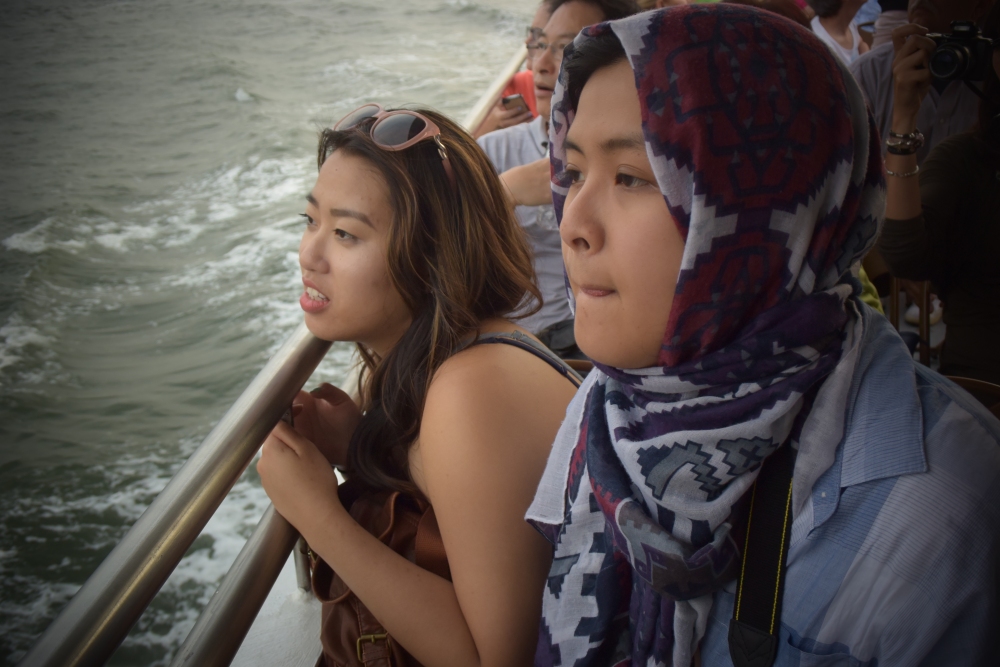 Q licking her lips again. While we’re not sure what to make of T’s facial expression and of Q’s too.

The New York view was on the other side of the boat while we were on the New Jersey side as the tour guide explains New York. (Look at the view… of people and heads.)

QT at their natural (HAMS) habitat.

QT at their natural (mung) habitat.

T^2 at her natural habitat. (Not really.) 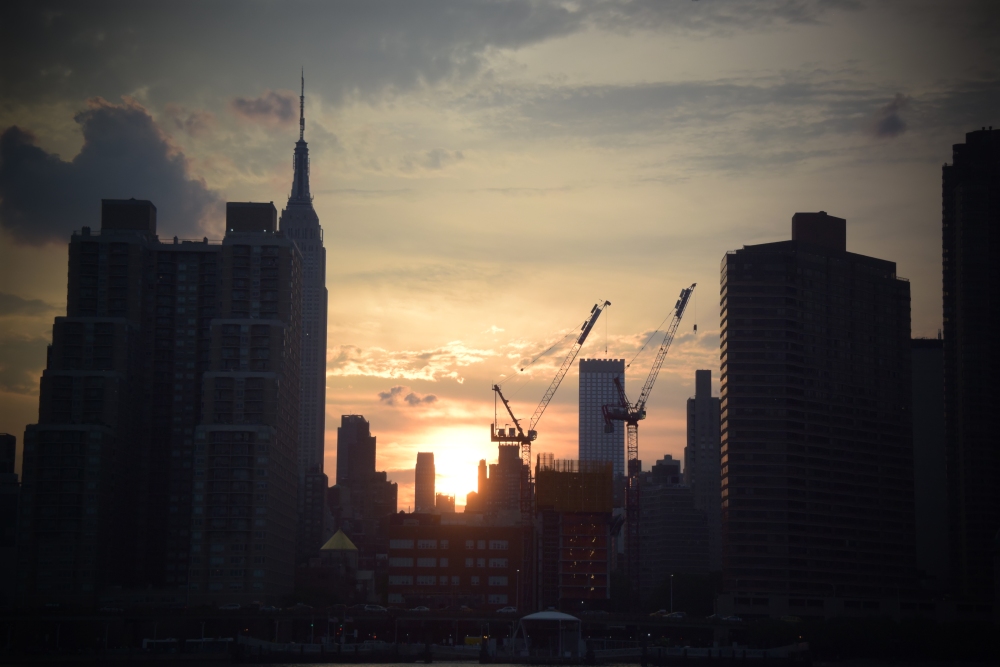 The sunset on the New York side was gorgeous.

Q couldn’t keep her eyes open every time we took a picture of her. So our last resort was this. 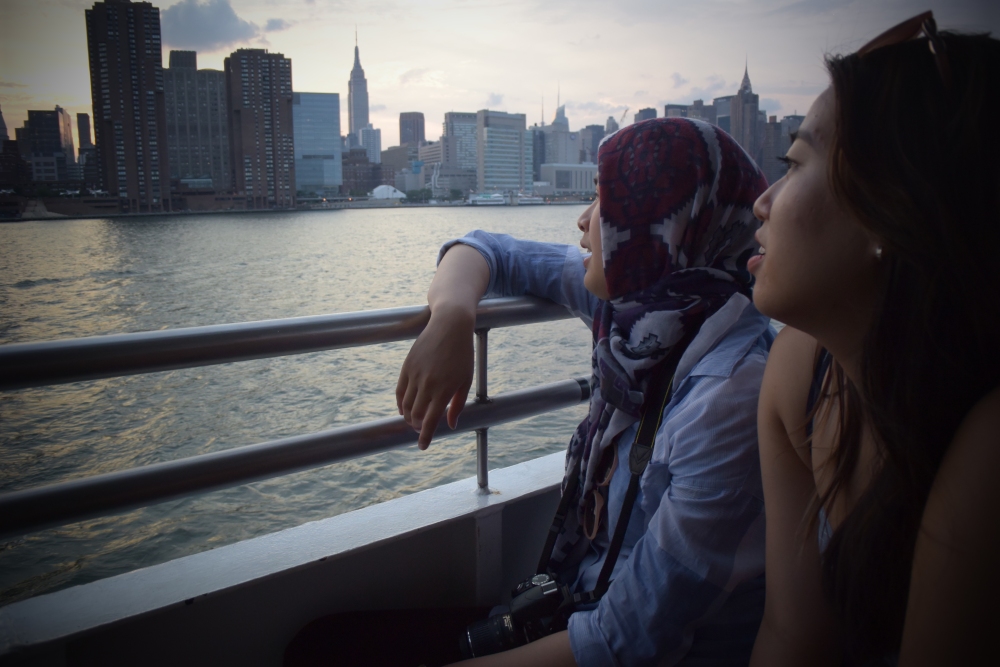 We were super sad that the ride was coming to the end and was trying to soak it up as much as we could.

Right next to our cruise line there was a restaurant boat called North River Lobster Company and we wanted to try it out. It was jam packed with people. It was a self seated place so it was hard to find a table and the system was crashing on us too so we couldn’t order anything yet. By the time we went through all three decks, the boat hds already set out for one of their cruise times. As we waited for the system to start back up we enjoyed our second river cruise. (For Free!) By the time we got back to the pier people were leaving and the system was slowly working again. So we went to the top deck, ordered our food and enjoyed the breeze and view. By the time we got our food the boat was ready to head out again for their last cruise. (In one day we had three river cruises!) 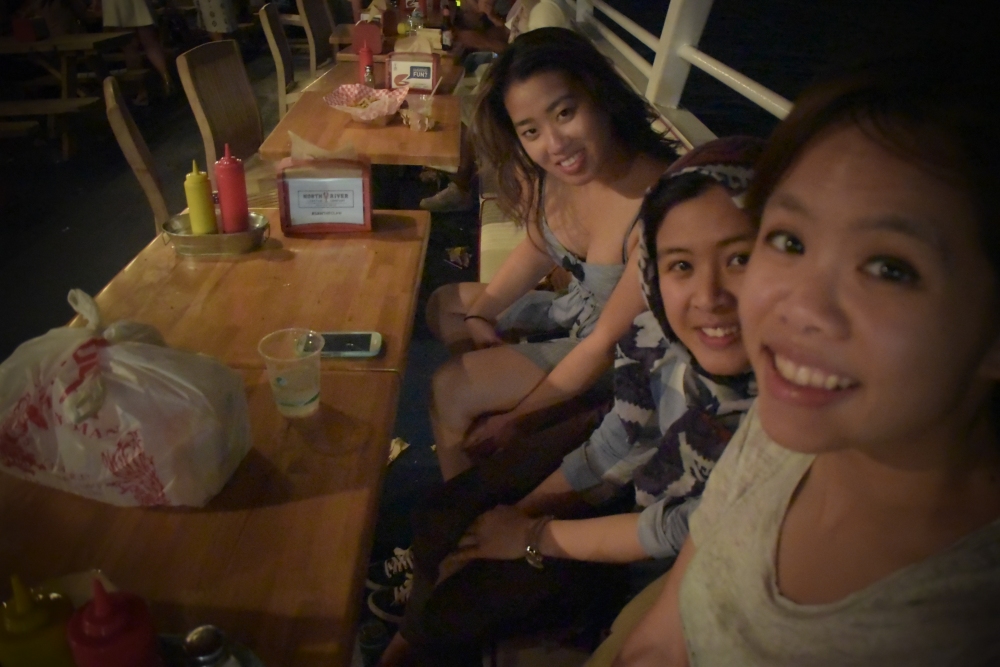 We ended our night right and very relaxed. 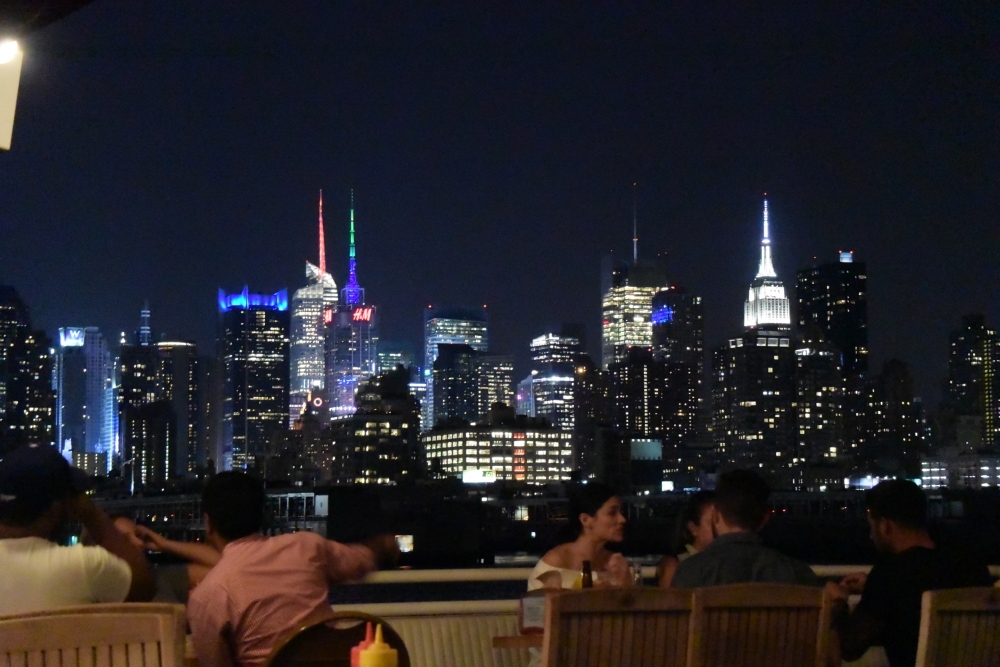 Now this is was you call a Harbor Light Cruise. We never got tired of the view!

Stay tuned for part 3 of our trip!