Hi! I’ve decided that I’m going to try and do mini-recaps of King of Masked singer. I’m absolutely loving the show so far but I was a little hesitant to recap because, well, my Korean isn’t in tip-top shape and they talk…a lot. But I’m going to try my best and give you guys all that I know and my opinions (which tend to be fluffy, just a heads up, lol).

**English mask names made up by me.

I have to say that I love his emoji looking mask. Their rendition of “The Blue In You” by Kim Hyun Chul and Lee Sora had a super jazzy feel. It was really easy to listen to them sing together. During the performance, Dongwoon from Beast commented that the girl must be a singer to which Shin Bong Sun agreed but then told him that she can’t really believe him, haha!

Pink Antenna wins the round and Our Dad is unmasked as he sings “Bounce” by Cho Young Pil. It turns out to be Yook Joong Won, lead singer of the band Rose Motel. Everyone loved his voice and commented that they didn’t know that he could sing THAT well. I guess I’d take that as a compliment.

They sang a song called “Feeling Only You” and it was good. They both sounded good. At the beginning I liked President Kim’s voice but then as the song progressed I preferred Whistle Face’s voice. After they sang, they gave the panel a chance to get an extra listen to President Kim’s and Whistle Face’s voices. They started to play some weird yodeling music, so naturally they both yodeled and totally sang in a different voice.

President Kim lost and it’s all-around entertainer, Hong Suk Chun. What?! I was totally surprised. I had no idea he could sing this well, let alone sing at all. I also loved the fact that he wore a wig.

Round 3: Cleopatra vs. Unicorn

WHOA. What just happened? This pair literally pulled off an opera-like performance with “Phantom of the Opera”. Everyone expected Cleopatra to be a lady, but when he (yes, he) came out of the tunnel people were like, “Huh? Could still be a girl”, and it was the same with me. Then he started singing and everyone was like, “Whoa! Definitely a guy.” Unicorn was just as good and surprising as she hit those super high notes at the end. The panel started to guess who the guy could be from Kai, who is an opera singer not EXO’s Kai (I know I was a little surprised and a little disappointed), to trot singer, Park Hyun Bin.

It was a tough decision but Cleopatra beat Unicorn by just one vote. Unicorn is Bae Da Hae, whom many suspected was the Golden Laquer (who was actually f(x)’s Luna).

I wonder if they called up each other the day before and was like, “hey let’s wear similar masks”. Sorry guys, I’m really bad at making jokes XD. Anyways, I liked their super soulful rendition of “Like Rain and Music”. Goosebumps all day man, goosebumps. I wouldn’t have been able to guess who the female singer was but Twitter kind of spoiled it for me. The one guy on the panel (the old one on the far right) commented that she has a wonderful tone that’s meant for singing. For the guy, I guessed Jung Dong Ha and someone else on the panel did as well.

Blue cat won and Pink Cat was unveiled to be Girls’ Day Sojin. I personally would have voted for her. 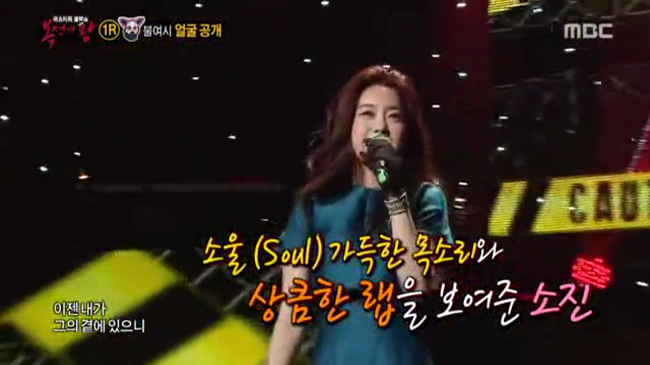 I hope you guys enjoyed their performances. Let me know what your favorite performance was and who might be able to beat Jingle Jingle Lark next week!

Also, check out My Top 5 Performances of King of Masked Singer and this video: