I will let the next three pictures entice you to click the read more button, lol. 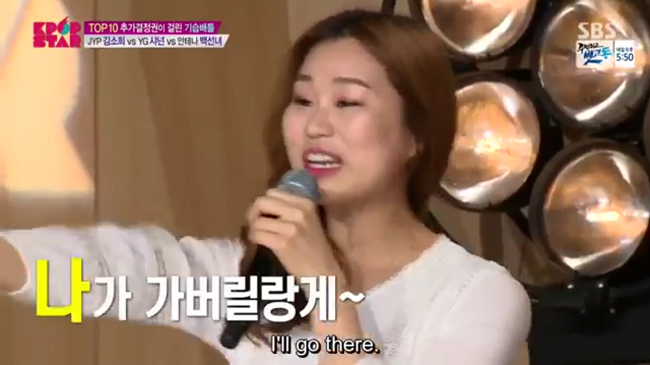 Her segment wasn’t very long. I feel like Yoo Hee Yeol has a plan for her, I’m just not sure what it could be.

We’ll find out soon since Antenna casts her.

Truthfully, I totally forgot about them. I just feel like that performance was more like a performance a rookie girl group would perform for like a lunar new year special or something. It was a little boring and a bit amateurish. And I wasn’t a big fan of the dance they did at the beginning. I won’t deny that they did sound good.

Neither of them gets cast by a company.

Whew! They were good. I think that their voices blended really nicely. After hearing the judges comments, I’m not really sure what’s going to happen to the both of them. You know as I’m listening to this performance again, I think it performance sounds better with your eyes closed.

They both get cast by Antenna!

The one everyone was waiting for. After her performance, I really want JYP to teach her to punch those high notes out of the sky. I was really looking for some powerful notes. Because that’s what kind of song it is. It’s a statement. It’s a strong statement of a song. I find her style to be more of a slow, chill kind of vibe.

She chooses YG in the end.

Each judge has one spot left, so they have the chance to choose from the disqualified contestants.

Before we get to the top 10 round, everyone gets a sneak peek at what the other teams are doing. It’s time for the SUDDEN BATTLE! Okay, that doesn’t sound as awesome as it is. Well, it’s probably not super awesome but its fun. Each company chooses their top contestant and the winner of the three gets to have a priority card. JYP sends Kim So Hee, YG sends Shannon, and Antenna (surprisingly) sends out Baek Sun Nyeo.

Kim So Hee goes first and sings “Bloom” by Ga In. It’s one of my favorite k-pop songs. I thought she did okay. She’s done better. I don’t know, it’s a little hard for me to judge this performance. I don’t know why. Maybe it’s because I was expecting too much.

Shannon goes next and performs a mashup of Stevie Wonder’s “I Wish” and Jackson 5’s “Blame it on the Boogie Man”. She forgets some of the lyrics and recovers a little but you can see that she wanted to make sure to finished the song well. I think it was a little too ambitious considering the amount of time they had to prepare (how much time you ask. I’m not sure myself but I can’t imagine it being very long).

Baek Sun Nyeo sings Baek Ye Rin’s “Across the Universe”. Her performance sounded good to me. Yoo Hee Yeol was smart to pick a song that she could just groove with because of the short time that they had to prepare. She was definitely off beat at times, but still good.

Kim So Hee won with a solid performance giving JYP the chance to save one of their team members if needed. It looks like next week we’ll start to get our top 10. Truthfully, I’m not sure how the whole girl group/trainee thing will work. My best bet is that they’ll pick the best trainees and make a girl group out of that.

While you’re waiting for next week’s episode, check out this video of us singing some misheard lyrics.